When President Biden took office earlier this year, one of the big-ticket items on his agenda was to roll back the Tax Cuts and Jobs Act of 2017 put in place by President Trump. The Biden Administration’s proposed tax plan should not come as a surprise to most as it includes such measures as restoring the top individual federal income tax bracket to 39.6%, up from the 37% imposed by the TCJA[i].  Of some surprise however, it the administration’s proposed changes to how 401(k) contributions will be handled from a tax standpoint. You may recall that I wrote a blog post entitled, “Investment Accounts 101”. Well if President Biden has his way then I may need to rewrite that post.

The change in question has to do with the tax benefit of contributing to an employer sponsored 401(k). Under current tax law, the participant contributes to a 401(k) plan pretax. As such, taxes on those contributions are deferred until the money is withdrawn from the account in retirement. This results in a tax deduction in the year in which the contribution is made. To put it simply, you are allowed to exclude your 401(k) contributions from your taxable income since you will be taxed on both your contributions and any investment gains when you withdraw the funds in retirement. You are simply deferring taxes until a later date.

The Biden Administration feels that this is problematic, as it tends to benefit higher income earners more than lower income earners. Their proposed solution is to change the tax treatment of 401(k) contributions from a tax deduction to a refundable tax credit[iii]. They propose that all 401(k) contributions, regardless of income tax bracket, would receive a 26% tax credit instead of the current dollar for dollar deduction from income. In the example above, both individuals would receive a tax credit of $520 ($2,000 X 26%) as opposed to a deduction based on their income tax bracket. It is important to note that there is a major difference between tax deductions and tax credits. Deductions remove the amount from your taxable income while a tax credit reduces your tax liability. This will become important as we move on.

The intent of President Biden’s proposed 401(k) changes is to “equalize” the benefits of contributing to an employer plan across income levels[iv]. At first glance, this may seem to be an admirable goal by some; however, this move would have some unfortunate unintended consequences.

For those 401(k) participants in a tax bracket higher than 26%, this could be a substantial blow. Consider the earlier example of the individual making $165,000 a year in the 32% tax bracket. Not only would they see the tax benefit of their contributions reduced but they would also see an increase in their taxable income for which the tax credit would not compensate them. The proposed tax credit is equal to 26% across the board but in our example, the individual is in the 32% tax bracket. This means that even after the tax credit the participant would still pay income tax of 6% on their 401(k) contributions.

Now here is where it gets interesting. If you remember my blog post explaining the various types of investment accounts, you will remember that withdrawals from 401(k) plans are fully taxed in retirement. This means then, in our example, 6% of the individual’s 401(k) contributions will be taxed twice, once when they go in and again when they come out. This problem is only compounded the more the individual makes. This could be avoided if the individual’s plan offers a Roth 401(k) option or in-service distributions to a traditional IRA that could then be converted to a Roth IRA via “backdoor” contributions[v]. However, even those options are not a selfsame substitution, as it would mean paying taxes on the entire contribution up front.

This also brings into question whether or not 401(k) withdrawals would in fact be taxed under the proposed changes. After all, if you remove the ability to deduct contributions from participants income, then technically one could say those contributions would be made after tax (remember the difference between tax deductions and tax credits?). But then again, this is only logical which is not a trait that politicians are well known for.

Double taxation is not the only consequence of this change. The change would also effect families and individuals who stand on the edge of two tax brackets. In prior years, families in this situation could take advantage of the income tax deduction on 401(k) contributions to help move their income into a lower tax bracket. For example, an individual making $190,000 a year would be able to move from the 32% tax bracket to the 24% tax bracket by utilizing their standard deduction ($12,550) and contributing the annual maximum of $19,500 to a 401(k). Under the plan proposed by President Biden, that same individual would be unable to deduct their 401(k) contributions from their income thus leaving a portion of their income in the 32% tax bracket. The 26% tax credit would help to offset their additional tax liability but they would still end up with a higher tax liability under the proposed changes. 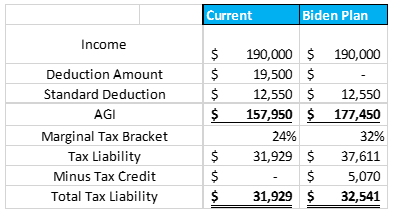 For couple’s who are married and file jointly, this is less of a problem. A family between the 12% and 22% tax bracket will see some benefit from the new changes while those in the higher tax brackets will end up with a higher total tax liability much like the individual in the example about. However, a family making $100,000 or less would likely see the most significant current tax benefit: 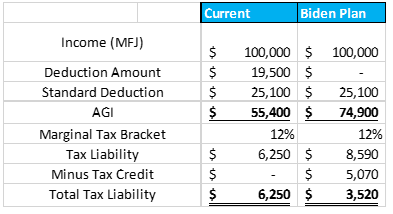 It is important to note that the examples I mentioned are purely hypothetical. Personal income taxes can be incredibly complicated and I am certainly not a tax professional. The proposed changes could also change significantly or not even make it into the final bill. My point in writing this post is merely to educate you on potential changes ahead and how they could affect you should they become law. For more specific personal tax advice, I would advise that you speak with your tax professional or CPA.

As always, I will be ending this post with a song of the week. In the past couple of weeks I have been on a classic rock kick so here is an oldie but goodie from Tom Petty!