The Surprising Correlation Between "Overreaction Tuesday" and Year-end Holiday Shopping

The holiday season is in full swing. While many are already looking forward to Christmas, we cannot forget about America's second favorite holiday, Thanksgiving. Thanksgiving is coming up next Thursday and I will admit I am really excited for it. The thought of turkey, ham, mashed potatoes, casseroles and so many more traditional favorites is enough to make your mouth water. To top things off we all get the privilege to watch Lions lose again. A true Thanksgiving tradition. The gathering of family and friends around good food invokes fellowship and thankfulness, which is the reason for the holiday after all. Once the festivities die down and everyone falls into a state of lethargy, preparations begin for a much less peaceful activity; Black Friday shopping.

Black Friday is annually held the day after Thanksgiving and is usually the busiest shopping day of the year in the U.S..  Stores around the country participate in providing deals and offerings that can only be taken advantage of on the day. As you all know, this can cause some pretty gnarly fights among shoppers who want to take advantage of the annual post-Thanksgiving offerings. After all, nothing says “I’m so thankful” quite like fighting tooth and nail with some stranger over a newly released Xbox game. Because of increased popularity, this pseudo-holiday has spilled over onto the following Monday which is now aptly named Cyber Monday. Thankfully Cyber Monday is conducted mostly online with deals on different tech products and services. So, not nearly as many physical altercations take place. From an economic standpoint, you would infer that the sales numbers from these two days could help indicate the trends for the rest of the year. Surprisingly, the opposite is the case.

Studies show that reacting to the retail sales numbers on the day after Cyber Monday, which I am coining “Overreaction Tuesday”, is not prudent. The reason for this is that the immediate results tend to be the opposite of what you should expect for the rest of the year. 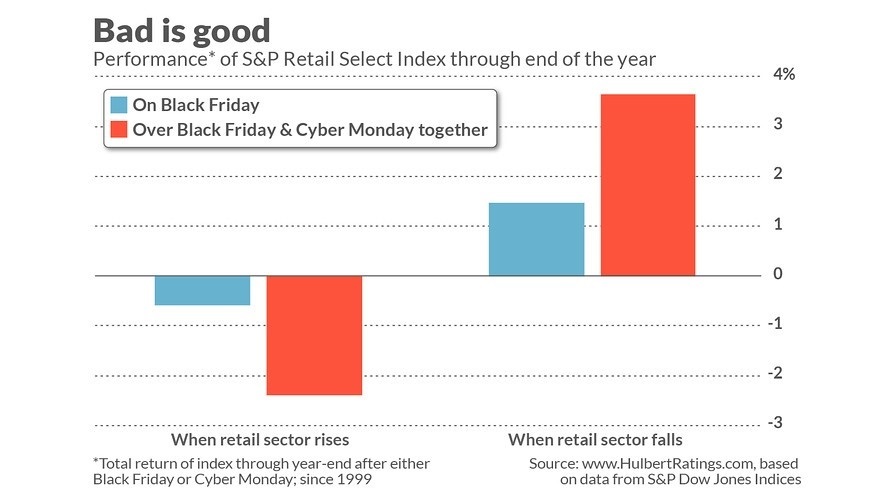 When the retail sector index rises following Thanksgiving weekend, it averages a 2.3% decline throughout the rest of the year. Inversely, when the sector decreases immediately after, indicating lower than expected sales, the index tends to rise on average almost 4% through the end of the year. So, it seems that when shoppers stay home during the busiest shopping weekend of the year they tend to come out in even greater force over the remaining month till year-end, which makes some sense. From an investing standpoint this is a valuable lesson; do not overreact. As can be seen, retail sector investors overreact when Black Friday is not as lucrative as usual, and they miss out on gains because of it. We’re all prone to knee-jerk reactions in life and this is no different in investing. Rather than having a pavlovian response to market events you may deem concerning, focus on the financial plan you have in place and trust the work you have put into it!

I will leave you with two extra tidbits this week:

First, here is a link to a recipe for cornbread casserole. In my humble opinion this is one of the greatest Thanksgiving side dishes. I highly recommend you add it to your Thanksgiving lineup if it isn’t added already.

Second, the song of the week.

The opinions voiced in this material are for general information only and are not intended to provide specific advice or recommendations for any individual. All performance referenced is historical and is no guarantee of future results. All indices are unmanaged and may not be invested into directly.